It was July 12th. Pallavi’s Birthday.

Well, lets go back one day..it was July 11th, the day before. The day for a surprise. I had everyone on my side – except a little luck. So here is what we had planned:
A Dance Party at the Kebab Corner in Medford. Nothing could beat that…Pallavi can never expect me to throw her a surprise dance party on her birthday. This is the best idea i have come across since logicwala…i was so excited.

Sachin-Bosky, Param-Archana and Subrat were all ready to surprise Pallavi. We were supposed to reach there at 9:15, when the team was all settled there at 9. It was a good plan – except that the place was near Chipotle. And Pallavi was hungry. And when she is hungry she want to eat a burrito. You know what i mean…so we ended up going to Chipotle…and i started worrying about what will happen if Pallavi sees anyone of the guys here and she will join the dots – her lawyer’s mind never stops working.

Anyways, we made her sit face in opposite direction and so happened that when everyone else was entering kebab corner – which was visible from where i sat- was not visible to Pallavi. A Close escape!!

Now, it was show time. I called everyone at the restaurant to hide and come out only when Pallavi enters. They agreed. Worse – They did it! 🙂 So when Pallavi entered – no one was there. Then the restaurant host said “Happy birthday” to her (THIS WAS NOT PLANNED!! I was surprised!) And no one was there yet. I rushed out to check if they were hiding outside. No one was there. After 2 mins – When Pallavi realized a little bit, that probably we are having a party here instead of at home – everyone came out from the kitchen yelling “Surprise!! HAPPY BIRTHDAY!!”…but that was little late..wasn’t it. 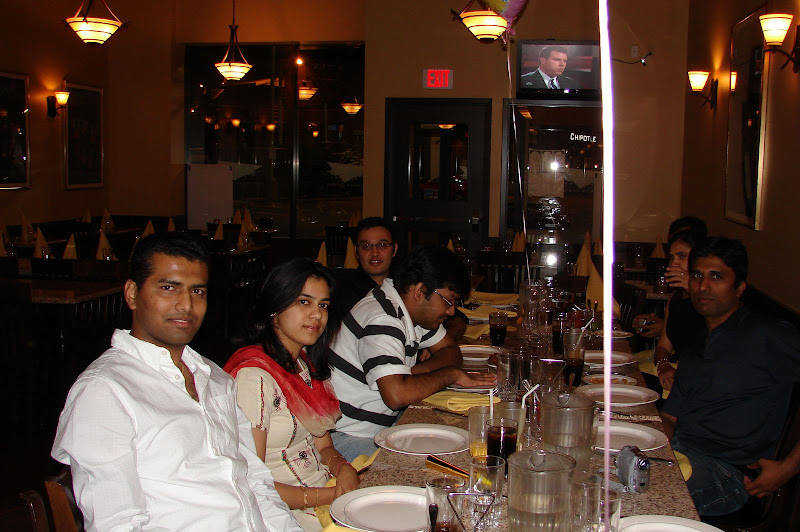 but anyways, it was a great celebration. May be Party was not a surprise, the Dance was. It was a fun night, with all friends…